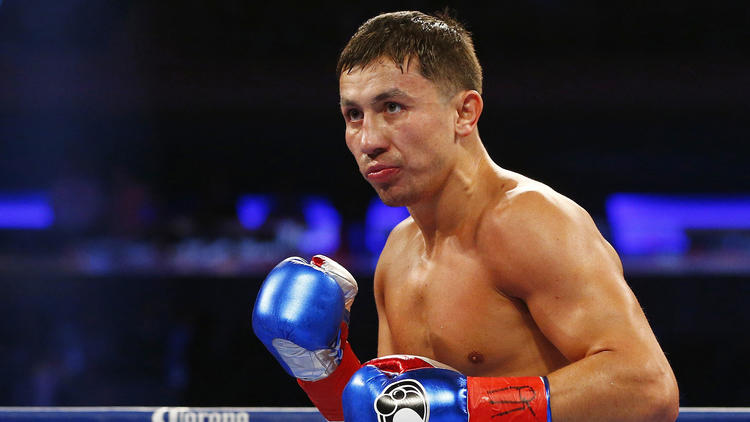 Golovkin: If Canelo Doesn’t Want To Fight, I Want The WBO Belt

Because of drawn out negotiations, Golovkin has only fought twice twice per year in 2016 and 2017. Prior to that, he was fighting three to four times a year.

In 2017, he won a very close twelve round unanimous over Daniel Jacobs in March at New York’s Madison Square Garden, and then came back in September to fight to a twelve round split draw with Saul “Canelo” Alvarez at T-Mobile Arena in Las Vegas. There are ongoing discussions for Golovkin to face Canelo in a rematch on May 5th, likely at T-Mobile. Both sides are on board with the fight, but right now it’s all about the financial terms coming together.

Last month, Canelo was officially  made the mandatory challenger to Golovkin’s WBC title. The next fighter in line for a crack at that belt is undefeated contender Jermall Charlo.

If that rematch falls through, then Golovkin would like to unify all of the middleweight belts – and there is only one remaining, the WBO title.

Next month, WBO champion Billy Joe Saunders will travel to Canada to defend his title against former IBF champion David Lemieux. Golovkin stopped Lemieux two years ago to pick up the IBF strap.

Saunders has already made it clear that if he beats Lemieux, then the next fight he wants would be Golovkin – unless GGG was defeated by Canelo.

“I would love to fight three or four times a year but I know it’s difficult. If Canelo does not want the fight, then obviously I would love to unify. I can not put pressure on the WBO champion but if he wants I will be willing because my dream is to have all the titles,” Golovkin said to ESPN Deportes.