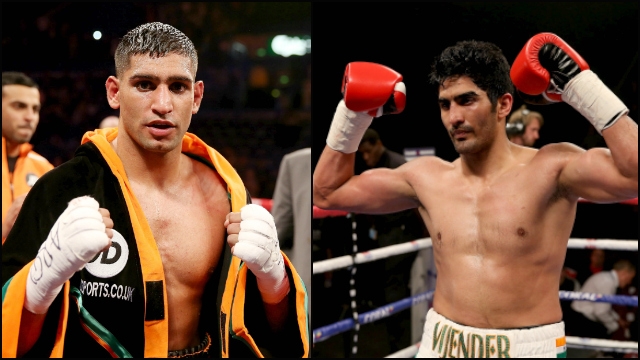 Move aside Floyd Mayweather and Manny Pacquiao. The world is now awaiting Vijender Singh vs Amir Khan. A bout that can add another chapter in the sporting rivalry of India and Pakistan and be a game-changer for the sport in the sub-continent.

Recently-crowned WBO Asia-Pacific Super Middleweight champion Vijender Singh has raised hopes of a possible bout between him and British Boxing star Amir Khan. Despite the fact that the two are in different weight categories, speaking exclusively to India Today, Vijender said, “Why not? This fight is very much possible.”

The Indian pugilist went on to add, “Vijender vs Amir will be the fight of the century. And whether Delhi or Lahore or Karachi, let’s do it. I’m ready for the bout anywhere in the world.”

So will he lose weight or will Amir have to gain?

It all depends on the promoters of course who will have to pull a few strings to make this bout a reality. While the British boxer of Pakistan origin fights in the light welterweight category which goes up to 63.5 kg, Vijender is currently in the Super middleweight category of 73-76 kgs.

With talks flying around of a possible bout between the two, Amir Khan had shot out a warning to the Bhiwani lad earlier, tweeting, “Congratulations to @boxervijender on the win. Careful what you wish for kid!”

Vijender was a sport about the jab, saying, “Some people drink snake blood, some do other things. This is pro-boxing. It’s alright here. I don’t mind.”

Vijender says the two are friends and often talk through twitter or texts. Amir even invited him home when Vijender was fighting a pro bout in Bolton. While Viju couldn’t make it, the two share a special friendship. In April this year, Amir Khan had shown interest in fighting Vijender in India and the latter had accepted the challenge.

Speaking on his future, Vijender also added that fans could him in the ring again towards the end of the year and currently, he is discussing with his promoters if a shot at the world title is possible.