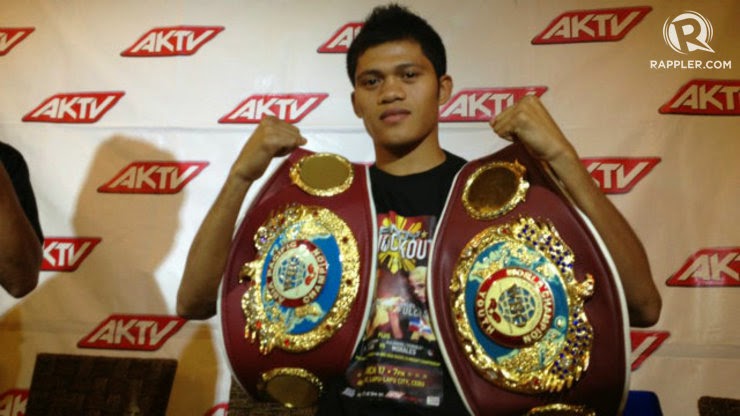 Saludar gets toughest challenge yet WORLD Boxing Organization Asia Pacific minimum weight champion Vic  Saludar,  who is ranked No. 4 in the world, gets the biggest chance of his career when he battles Japan’s world champion Kosei Tanaka, the 20-year-old youngster with a record of 5-0, with 2 knockouts on New Year’s Eve in Nagoya, Japan.

One of the newest additions to the famed ALA Gym in Cebu, Saludar said he has been “more focused in training now because I know this is the biggest fight of my career.”

The 25-year-old Saluiddar, who has a record of 11-1 with 9 knockouts to his name, said this is a big chance for him as his dream is to become a world champion, which is the reason he turned pro after a highly promising amateur career.

Should Saludar win, he will join Donnie “Ahas” Nietes, the WBO light flyweight champion as the second world title holder from the ALA Gym.

Asked about possible adjustments against the Japanese world champion, Saludar indicated the adjustments will be done inside the ring, which will depend on how Tanaka fights.

He revealed he had discussed strategy with his coach and the plan is to |always be in a position in  front of him, “so I would always be ready to strike anytime and to make fast adjustments.”

Saludar believes his advantage is that Tanaka is not a powerful puncher.

“I would focus on that weakness and will try to catch him if there’s an opening. At the same time, I have to be careful against his punches that sometimes come  quickly,” said Saludar.

Tanaka, in only his second fight as a pro, fought world-rated Filipino Ronelle Ferreras and won a comfortable victory. In that bout, Tanaka demonstrated his speed and skills, despite having to take some solid body shots on the way to an eight-round unanimous decision  on March 16, 2014.

Tanaka won the vacant world title with a stunning 12th-round unanimous decision over Mexico’s favored Julian Yedras on May 30 this year.