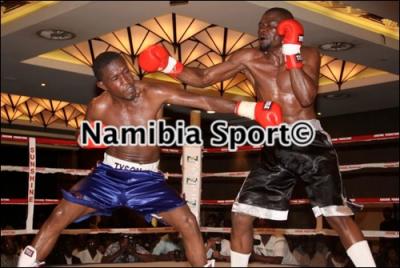 Tornado Sánchez a concluir preparaciónof Kenya at a Boxing Bonanza scheduled to take place at the Windhoek Country Club on October 12.

Ushona, who is currently ranked second in the world by the World Boxing Organisation, has a professional record of 26 wins, 2 defeats and one draw, while Bruno has a record of 16 wins, 14 losses and three draws.

Julius Indongo will also take on James Onyango of Kenya for the vacant WBO Africa Junior Welterweight title, while other Namibian favourites like Vikapita Meroro, Sacky Shikukutu and Abmerk Shidjuu will also be in action.

Namibian boxing promoter Nestor Tobias, who hosted his last boxing bonanza as recently as September 8, said he wanted to keep boxing alive and make it the number one sport in the country and Africa at large.

“We’ve got seven boxers ranked by the WBO, one of the leading boxing organisations in the world. In the old days South Africa had big name boxers like Brian Mitchell, Dingaan Thobela and Gerrie Coetzee, but now Namibia is the leading country in Africa when it comes to the rankings,” he said.

“We have to keep Tyson busy and he has to protect his rating. Bruno is a very experienced boxer and will give him a tough workout,” Tobias said.

In the main supporting bout Vikapita Meroro will take on Victor Moyo of Zimbabwe in a rematch over six rounds.

Namibia’s WBO Africa flyweight champion Abmerk Shidjuu will take on an as yet, unnamed opponent, although Tobias confirmed that it would be a Zambian boxer.

Meanwhile, Julius Indongo will challenge for the vacant WBO Africa junior welterweight title when he takes on James Onyango of Kenya over 12 rounds. Indongo is still undefeated after 10 pro fights, while Onyango has a record of 11 wins and four defeats.

In other fights, Manfred Haimbanga, who has won both his pro fights to date, will take on Costa Niilo, who has won one pro fight to date, in a junior lightweight fight over four rounds.

Anthony Jaarman, who has a record of seven wins and one loss, will take on Victor Musunga of Zimbabwe (three wins, one loss, one draw) in a junior middleweight fight over four rounds.

Lucas Andeleki (one win, one loss) will take on Mathias Shiimbi (four wins, one loss) in a lightweight fight over four rounds.

Tobias said he did not have a sponsor at this stage, but would promote the fight on his own.

“We are having difficulties in funding, but that’s not an excuse. I’m doing this for these kids, and we are creating a foundation for these boys so that they can make a living,” he said.

“Johanna Benson just showed us that there is no limit to success. She gave us hope and showed that anyone can be successful in life,” he added.