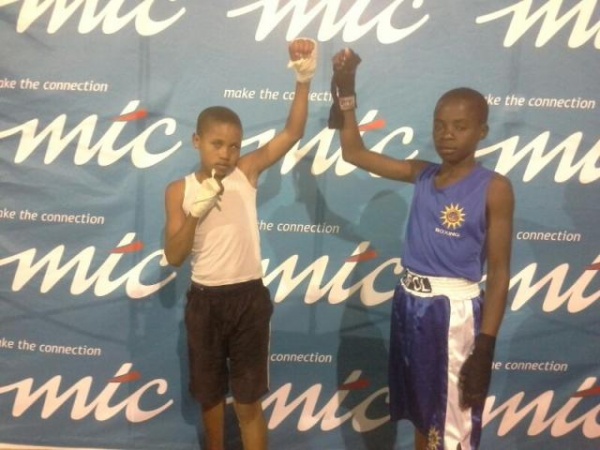 Taking boxing to the youth Having been crowned the Best Boxing Academy in Africa by the World Boxing Organization Convention a few days ago, the MTC Nestor Sunshine Boxing & Fitness Academy went a step further by taking boxing to the youth when they held a Youth Development Boxing Day at the UN Plaza in Katutura.

The UN Plaza in Katutura was the place to be for young aspiring boxers when they finally got the opportunity to step into a real ring to showcase their boxing skills.

The MTC Youth Development Tournament was organized by the best boxing Academy in Africa, the MTC Sunshine Boxing & Fitness Academy and it was attended by children accompanied by their parents who became their fans throughout the day.

The event started as early as 15h00 showcasing 24 bouts where 48 juniors between the ages of 12-17 years competed. The juniors were cheered on by a good boxing crowd which included their parents and family making this a perfect family outing for the youth.

An excited Nestor Tobias, who was recently also crowned the Best Boxing Promoter in Africa by the WBO said that the event was a resounding success and part of its mandate to take boxing not only to all corners of Namibia at all levels (professional and amateur), but also to extend this platform to the youth to inspire them to become world champions one day.

“Boxing is a very successful sport and has become one of the biggest sporting codes worldwide and we therefore need to inspire our future world champions from an early age,” Tobias said.

“We made a firm commitment to our sponsor MTC that we will put key emphasis on grassroots development and this initiative was part of many more to come,” he added.

To add excitement to the line-up, there were also 15 bouts in total with 30 senior boxers battling it out in the ring, with all boxing clubs in the Khomas region, including Nampol and the NDF participating.

“The juniors were released at about 20h30 because boxing is a very disciplined sport and we therefore need to act responsibly when dealing with the youth. We also made sure that their bouts take place in very good conditions so that they don’t hurt each other, and they were therefore protected,” Tobias said.

“The MTC Nestor Sunshine Boxing Academy is preparing for the biggest fight of the year taking place on the 5 October at Ramatex with Paulus ‘The Hitman’ Moses taking on Leonardo Gonzalez from Argentina and boxing fans are therefore encouraged to buy their tickets from Computicket well in advance,” Tobias added.