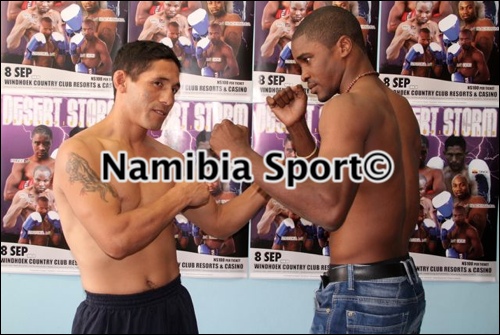 Immanuel Naidjala has vowed to knock out Luis Singo of Ecuador when the two meet in an international bantamweight fight on Saturday night.

Naidjala and Singo came face to face for the first time at a press conference in Windhoek yesterday where Naidjala confidently predicted a knockout.

“I want to welcome my opponent here in Namibia. I’m so grateful that he at least landed here because that was the worry (that he would arrive). I respect him as a man because of his record but as a boxer I don’t respect him at all,” he said.

Singo has a lot of experience with a record of 15 wins, 10 defeats and 2 draws, although he is probably past his prime at the age of 37. He has lost his last five fights while his last victory came nearly two years ago in October 2010.

Naidjala is one of Namibia’s hottest boxing prospects and at the age of 27 will have age on his side. He is still undefeated after 14 fights and is currently the interim WBO African bantamweight champion, while he is also ranked seventh in the world by the WBO.

Naidjala said he had trained hard for the fight and had worked on some new tactics that he would display in the ring.

“My preparations have gone well. When my promoter told me about this fight I was very excited. It’s one of my biggest fights against a fighter from outside Africa and that alone encouraged me to train harder. The things that we put into this preparation, we haven’t done before and I promise you I’ll be able to show that on Saturday night,” he said.

“I’m just concentrating on the future and him (Singo) being in front of me. I hope he’s fast enough because looking at his age, I don’t know, and I’ll make him a punching bag that day,” he added.

Speaking through an interpreter, Singo thanked Namibian boxing promoter Nestor Tobias and the Namibian people for inviting him to Namibia.

“He has trained very hard and he has already been overseas a couple of times in Europe as well as Latin America where he has fought some good boxers. He will do his best on Saturday night to win the fight so that he can take the victory back to his country,” he’s interpreter said.

There will be several other exciting fights on the undercard. In the main curtain raiser, Wilbeforce Shihepo will defend his WBO Africa Super Middleweight title against compatriot Johannes Mwetupunga. Shihepo called on his fans to arrive early because he said the fight could be over quickly.

“This is my time to get back on the map again and I’m ready for Saturday. The fans better come in early because whenever I get a chance to catch him, he’ll be gone,” he said.

In another exciting match up, Tommy Hango will face Sackey Shikukutu in a rematch. Hango beat Shikukutu on a split decision on June 9 to win the Namibian welterweight title and this time the two boxers will fight it out for the vacant interim WBO Africa welterweight title over 12 rounds.

“I lost to this guy (Hango) last time, so he was the winner and I want him to prove himself again that he is the real man. Since I made my comeback I have not won a fight. I drew one fight and then lost a fight, so this is my time to mark a win on my record,” Shikukutu said.

There will be four other fight on the undercard. Peter Malakia and Samuel Kapapu will fight for the vacant Namibian lightweight title over 10 rounds, while Sakaria Lukas will fight David Egumbo in a 58kg catchweight fight over four rounds.

Tickets cost N$100 per person or N$10 000 per table and are available at computicket at Checkers and Shoprite, at the Namibian Boxing Control Board or at the Windhoek Country Club.