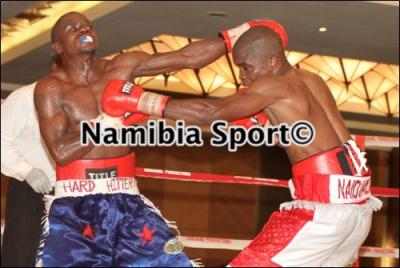 Paulus Ambunda retained his WBO African bantamweight title at the Independence Boxing Bonanza in Windhoek on Tuesday night but the star of the show was Immanuel Naidjala.

In an unbelievable fight, Naidjala was knocked down three times but showed great courage to recover before eventually knocking Mzoliso out in the sixth round.

After a tentative first round, Naidjala exploded into action in the second and soon knocked Mzolisi down with a right hook for the count of eight.

Mzolisi managed to get up but was once again knocked down towards the end of the round. He got up but was clearly in trouble and was saved by the bell.

Mzolisi recovered quickly and caused a major stir when he knocked Naidjala down in the third round. It was not to clear whether Naidjala slipped or was knocked down, but he had to take the eight-count all the same.

Mzoliso was all over Naidjala and there was no doubting the second knockdown as he sent Naidjala to the canvas with a hook to the head. The capacity crowd was stunned into disbelief, but Naidjala managed to beat the count and somehow managed to see out the rest of the round.

The momentum had shifted to the South African, and early in the fourth round he sent Naidjala to the canvas with a straight left. Naidjala once again got up and recovered well, fighting back with some quick combinations at the end of the round.

With fortunes swaying to and fro, Naidjala once again took the initiative in the fifth round as he knocked down Mzoliso with a big right hook, but he got up and fought back strongly at the end of the round.

The drama continued in the sixth round as Naidjala went down, but the referee ruled that he had slipped. He immediately came back and a cracking right hook 2:13 into the round put an end to the contest as Mzoliso went down and stayed down for the count of ten.

The crowd went crazy, hailing a magnificent performance, and Naidjala was further honoured as he received donations worth N$15 000 from various companies after the fight.

Naidjala is now unbeaten after 13 pro fights and should now improve on his WBO world ranking of eighth.

In the evening’s main fight, Paulus Ambunda comfortably beat Cleutus Mbele of South Africa on points although his performance was not very convincing.

Mbele was far the busier boxer, throwing a steady stream of jabs, while Ambunda looked for one big knockout punch that never landed.

Mbele’s punches though had little effect and as the fight wore on, Ambunda did manage to land some big punches. Mbele however defended well and Ambunda seldom managed to breach his defence.

Mbele went down after a low blow by Ambunda in the third round and the fight had to be stopped for about five minutes to allow him to recover, but once back in action, he continued to jab away.

Ambunda stepped up the pressure in the fifth round, catching Mbele on the ropes with combinations to the body and head but the South African fought back well.

Ambunda looked increasingly frustrated as he tried to land a big bunch but struggled against his southpaw opponent, who kept him at bay with some good body movement and a tight defence.

By the eighth round some of Ambunda’s punches started landing and by the ninth, Mbele’s left eye was swollen closed.

In the final rounds, Ambunda stepped up the pressure with some big combinations but the nuggety South African fought back bravely as the boxers slugged it out toe to toe to the delight of the crowd.

Ambunda is now unbeaten after 19 pro fights and with a WBO world ranking of three, he could soon be in line for a world title fight.

Julius Indongo retained his unbeaten status in the lightweight ranks when he beat Misheck Kondwane of Zimbabwe with a fourth round TKO.

Indongo used his long jab to good effect, raking in the points and by the third round had opened up a big welt under Kondwane’s left eye. The ringside doctor inspected it and allowed the fight to continue but the referee stopped the fight 2:02 into the fourth round as Indongo landed combinations at will.

It was Indongo’s 10th straight victory as a lightweight, while Kondwane now has a record of 19 wins and 19 defeats from 38 pro fights.

Sacky Shikukutu made his long awaited return after a long injury layoff but was given a tough time by Pohamba Mandume in a 65kg catchweight fight over four rounds.

The fight started dramatically with Shikukutu throwing big uppercuts and combinations to the head and body, but Mandume gave as good as he got and slugged it out toe to toe to the delight of the crowd.

Shikukutu continued to land some big shots, looking for a knockout, but Mandume fought back with some great combinations and as the fight wore on, he grew in confidence.

By the fourth and final round Mandume slugged it out toe to toe with Shikukutu to the delight of the crowd.

The crowd, however, was not happy with the result, booing away as it was announced a draw, while Mandume left the ring in disgust.

Shikukutu now has a pro record of 13 wins and one defeat, while Mandume’s record stands at 4 wins and 4 defeats.

The powerful Shimbi landed some big blows and in the second round knocked Daniel through the ropes and out of the ring.

In the fourth round Daniel took two standing eight counts and Shimbi eventually won the fight on a unanimous decision, 37-34, 36-34, 37-35.

The results of other fights were as follows: