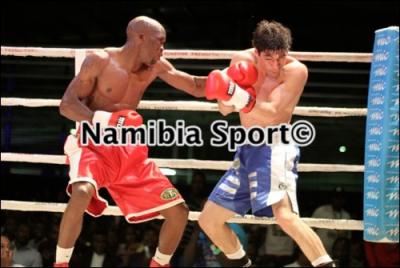 Paulus Moses retained his WBO International Lightweight title after beating Leonardo Gonzalez of Argentina on a 7th round TKO.

Moses put Gonzalez down with a right hook and although the tough Argentinian immediately got up, Moses was all over him before the referee stepped in to stop the fight, 1 minute 37 seconds into the 7th round.

Moses got a good workout from Gonzales, who was brave but not in the same class.

Moses raked up the points with his sharp jab and quick combinations but his defence was not great, with Gonzalez also regularly finding the target.

In the fifth round Gonzalez pummeled away at Moses on the ropes but Moses got out and finished the round stronger.

Moses controlled round six, landing some quick combinations and moving slickly, before the end came in the seventh round.

In the main supporting bout Tyson Ushona retained his WBO Africa welterweight title with a unanimous points decision over 12 rounds against Kaizer Mabuza of South Africa.

Mabuza gave Ushona a tough workout but in the end all three judges scored the fight 118-109 to Ushona.

Ushona was the busier fighter while he also sent Mabuza to the canvas with a sharp hook in the tenth round.

Pascal Ndomba of Tanzania was no match for Vikapita Meroro who retained his WBO Africa cruiserweight title after a second round TKO.

Meroro held a 6kg advantage and a big reach advantage and after a slow start, landed some big body shots by the second round. Ndomba clearly had had enough and did not come out for the third round.

The results of other fights were as follows: