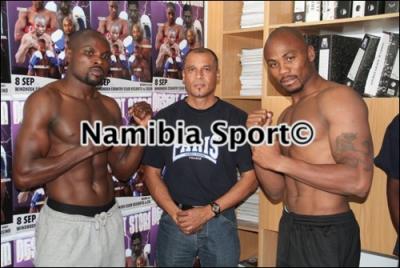 All systems go for Boxing Bonanza It’s all systems go for Saturday night’s boxing bonanza after all the boxers passed their medicals and had their weigh ins on Friday afternoon.

The only boxer who had a slight weight problem was Wilbeforce Shihepo but he managed to make the required limit after a short workout.

Mwetupunga easily made the weight limit of 76,36kg by weighing in at 75,60kg, but Shihepo initially weighed in slightly over the limit at 76,55kg. After a short workout he however weighed in at 75,98kg.

Immanuel Naidjala and Luis Singo of Ecuador who will feature in the evening’s main fight both made the bantamweight limit of 53,52kg. Singo comfortably made the limit, weighing in at 53,05kg, while Naidjala weighed in at 53,40kg.

Tommy Hango and Sackey Shikukutu who will fight it out for the vacant interim WBO African welterweight title both comfortably made the 66,68kg weight limit.

The WBO vice president for Africa Andrew Smale who was also in attendance, said he was looking forward to the boxing and congratulated Namibian boxing promoter Nestor Tobias on his efforts to promote boxing in Namibia.

“It’s good to be back in Namibia for such a big night of boxing and I’d like to congratulate Nestor. The last tournament (in July) got everyone buzzing, even beyond Namibia’s borders. It’s also nice to see that there are some local match-ups and title fights and I always look on the undercard to see what new talent is emerging,” he said.

Tobias meanwhile said that ticket sales had gone well although there were still tickets available both for individuals and for tables.

“We have already sold more than 10 tables but there are still a few tables left, while there is also still room for more individuals,” he said.

The tickets cost N$100 per person or N$10 000 per table and they can be purchased at the Namibian Boxing Control office or at the Windhoek Country Club.

Tobias said it should be an exciting evening of boxing.

“The boxers are all ready to go and hungry to win. It should be a great evening’s boxing,” he said.

The action starts at 18h30 and the programme for the evening is attached.