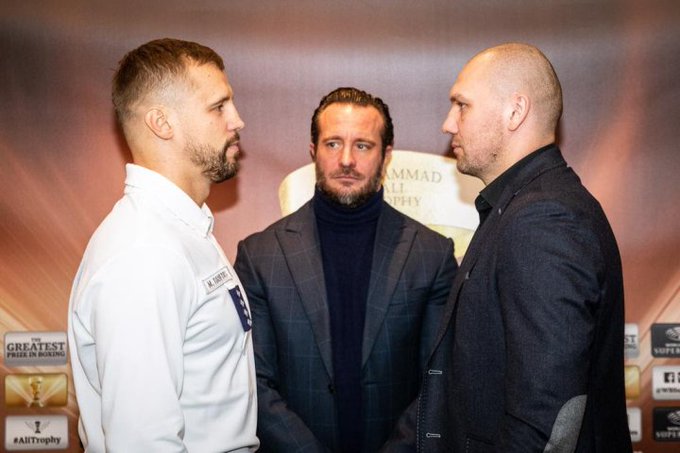 WBO Jr. Heavyweight Championship – Briedis: “It will be the World’s finest boxing show!”

Latvia’s Mairis Briedis (25-1, 18 KOs) feels ready to shine for a third time at the Arena Riga on June 15, when he faces Poland’s Krzysztof Glowacki (31-1, 19 KOs) for the WBO title, and a place in the Final for the Ali Trophy.

In Season 1 of the World Boxing Super Series Briedis fought twice in front of capacity crowds in Latvia’s capital. The national hero won a unanimous points decision over Mike Perez in the quarter-final and after an extremely tough and hard-fought battle, he lost to Aleksandr Usyk who claimed a 12-round majority decision, in the semi-final.

After defeating Noel Mikaelian via a unanimous decision in Season 2’s quarter-final last November, the former WBC champion is back at the Arena Riga for a second attempt of reaching the final. He is facing a warrior, who has promised to bring the war to Riga, a former WBO champ whose only career loss likewise is credited to Usyk.

“I am really looking forward to another chance to get to the final,” said Briedis. “In front of my people in a fight watched by the world, I will do my best to make Latvia proud.”

How has training been going?
“I am always trying to do what my trainers are asking from me. We are working on our prepared plan and thus far everything has been good and I myself feel better and better for every single day.”

What have you learned from last year’s semi-final experience? And this year’s quarter-final?
“There are things to learn from every fight and of course I took lessons from both of those fights to be better going forward.”

What do you think of your opponent, Glowacki?
“He is a very good boxer with a very heavy punch.”

Do you have a message for him?
“We’ll be able to pass our messages from one to another in the ring. Now it’s all about focusing on the preparation.”

What can the fans in Riga expect to see from you?
“It will be the world’s finest boxing show at the arena with two mega fights taking place at the same night plus all the local talent on the undercard who are all preparing to show their best on such a big night of boxing.”

What is your dream scenario for the fight?
“For me, the most important is to enjoy the fight and end it with no injuries or anything unwanted.”

Have you been seeing or following the other divisions in the WBSS?
“Unfortunately very little but as much as I have seen made me as a boxing fan very happy about the WBSS product.”

Who do you think you will face in the final?
“I have always been going step by step in my career and my next step is the semi-final bout against Glowacki which is the only thing I’m thinking of right now. And like I said, I’ll do everything to make Latvia proud!”

The WBSS returns on June 15 with a sensational doubleheader at the Arena Riga in Riga, Latvia: Mairis Briedis vs Krzysztof Glowacki and Yunier Dorticos vs Andrew Tabiti for spots in the Cruiserweight Final for the Ali Trophy.

Tickets for the hotly-anticipated semi-final in Riga are on sale from: bilesuserviss.lv

All the action will be live on DAZN in the U.S. and Sky Sports in the U.K.